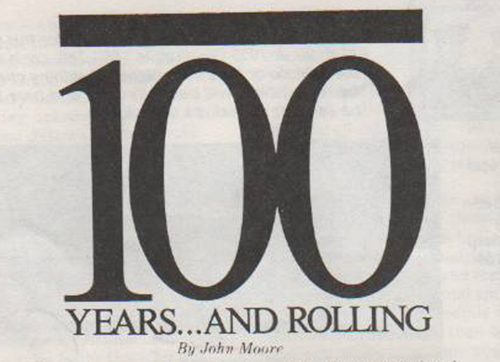 “You can’t get people to sit on top of an explosion,” declared turn-of-the-century automaker Col. Albert Pope, referring to the gasoline engine he was about to abandon for an electric one.
Poor Pope!  What would he have thought of today’s astronauts, several generations of Indy 500 racers or — most important–the millions upon millions of us who drive cars and trucks with internal combustion engines?
Thanks to a series of dreamers and doers blessed with a little more foresight and luck than Pope, the gas-powered auto has thrived like perhaps no other technical innovation, and during it’s first century, it has created profound personal and worldwide changes that will be with us for centuries to come. 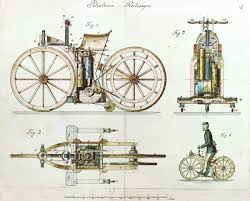 Of course, the car did not just materialize on the streets of Detroit–washed, waxed and rarin’ to go.  Way back in 2000 B.D. (Before Detroit), a visionary Chinese tinkerer described a self-propelled steam cart: and in 1769 Frenchman Nicolas Cugnot built a mammoth and unwieldy gun tractor that steamed along a 2.5 mph and overturned in what might be the world’s first automobile accident.
The great quest for the horseless carriage took place on several continents over several centuries  as an endless series of inventors tried to harness wind, steam and electricity.  But the real birth of the modern auto occurred in Germany in 1885 when two men, working 40 miles apart, almost simultaneously developed the first working liquid-fueled internal combustion engines. Karl Benz’ first Motor Wagon was essentially a large tricycle outfitted with a coach seat and a steering device that resemble the crank on a jalousie window, while Gottlieb Daimler’s earliest roadster was almost indistinguishable from a carriage–a reflection of the two industries from which the automobile business evolved.
A few years later, motoring took off in France, where by the mid -1890s a third of all the wheeled traffic in Paris was self-propelled.  Two notable pioneers were, Armand Peugeot, heir to a bicycle business, and Louis Renault, who developed the drive shaft, making obsolete the dangerous and unwieldy confusion of belts and chains that drove the wheels.

Meanwhile, Americans were also hard at work.  two bicycle builders from Massachusetts, brothers J. Frank and Charles E. Duryea, were probably the first successful U.S. inventors.  In 1893, their single-cylinder “buggyaut” (named for it’s resemblance to a carriage) was rattling through the streets of Springfield, terrifying horses, and soon after, an improved model won the first American automobile race, a 70-mile contest sponsored by the Chicago times Herald.
Soon any mechanic with a few dollars, a few tools and a little tinkering room was getting into the act. One of hundreds was Henry Ford, who in 1896 hand-built his first car in a backyard workshop in Detroit.  (Detroit was not to become the mecca of motoring for some time; in fact, New England, Indiana and Ohio all gave it a go, with more than 80 different car companies in Cleveland alone.)  A few months later Ransom E. Olds put together his first car and within five years had produced the first commercially successful vehicle, the curved-dash Oldsmobile.
In 1911, William C. Durant formed the Chevrolet Motor Company, naming it after his resident design geniuses, brothers Louis and Gaston Chevrolet. Soon models such as the 1914 “Baby Grand” and the 1915 “490” (named after it’s price)  were challenging the Model T. America was still light-years from the Corvette and the Nova, but the care industry was off and rumbling. 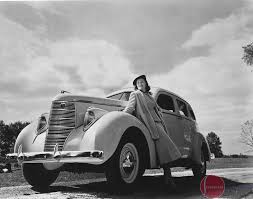 This 1938 Studebaker Champion was only one of stylist Ramond Lowey’s great designs.

But back to the beginning.  Early autos were hardly greeted with universal approval.  For one thing, they were often regarded as playthings of the rich.  And some pioneer motorists did stimulate anger with their breakneck 10-15 mph. pace and noisy engines that filled horses–still the “engines ” of choice–with unimaginable terror.  The result: tacks spread on city streets, saw blades buried under dirt roads, lovingly cultivated mud-holes  (the better to tow a car out of, for a price) and a rash of municipal road fees exorbitant even by today’s standards.  Angry horsemen pushed through laws that required motorists to stop and pull off the road to let horses have the right of way.  Someone even suggested that drivers pull over, break down their engines and hide the parts in the bushes.
And then came a major innovation.  Experimenting with men hauling cars by ropes from station to station, the modern assembly line was developed, cutting unit production time from 14 to six hours and changing the nature of work itself.
There were flaws, of course.  Cars had to be crank-started, a difficult and dangerous process since the engine could “kick back” the crank, breaking an arm, a shoulder or worse.  After a friend died from injuries suffered in a cranking accident, Henry Leland of Cadillac asked mechanical wizard Charles H. Kettering to come up with a better starting system.  “Boss Ket”  did and the self-starting engine opened the way for women to get behind the wheel.
By the late 1930s the automobile had spread throughout the world.  Even in Tibet, the most  remote country on earth, two cars for the Dalai Lama were put together from parts carried by yaks over the Himalayas.
In the U.S. meanwhile, vast social changes were occurring.  City dwellers cruised the country-side on the glorified cow paths that passed for roads — an early Oldsmobile “Limited” even featured gigantic 42-inch “stump-jumping” wheels and two-tiered running boards.  Since people no longer needed to live where they worked,  cities mushroomed into suburbs and suburbs into “exurbs.”
For the first time, population began to shift along paths different from existing rail and water lines.  Somewhere the first traffic jam was born, as an eventually unparalleled network of roads and superhighways allowed quicker and more flexible transportation.  While motorists were leaving the city, farmers were driving their produce into urban markets.  For better or worse the physical isolation of small town was ending.  Peering over the dashboard, a generation of youngsters could envision horizons beyond the imagination of their parents and many left their family’s traditional neighborhood, town or state.  Like Huck Finn on the Mississippi half a century before, they dreamed of exploring unknown America, but with on difference: they could chart their own course entirely.  The new and better roads, were seeing to that.
So began the American romance of cars and drivers, helped along by pre-World War II classics of technology and luxury: Duesenberg and Stutz, La Salle and Packard, the V16 Caddy and others.  Dozens of popular songs, blaring from car radios, immortalized the romance, as (after the war) did Jack Kerouac’s novel On the Road and television shows like Route 66 and it’s real star–a flashy Corvette.
In the early 1960s, sociologist Edward McDonagh wrote:  “The car has become a secular sanctuary for the individual, his shrine to the self, his mobile Walden Pond.”
The economic effects of the automobile have also been profound.  In the U.S., an industry that produced only several thousand units in 1900 today employs, directly or indirectly (in the steel, glass, rubber, plastic, chemical and other industries), about one out of every seven workers. Industry-wide shake-ups like the oil scam of the ’70s or increased domestic competition from overseas caused tremors in international finance.
Cars vans and trucks are solely responsible for tens of thousands of dive-in and drive-to businesses–shopping malls, industrial parks, fast-food restaurants, and many vacation and recreational spots.
In a century of incredible innovation, in which more than 3,000 car companies have come and gone, the one constant of the auto industry has been constant change.  The Zentmobile may be no more, or Rushmobile, the Serpentina, the Pungs-Finch or the O-We-Go.  But space-age innovations will help drive us into the 21st. century, where the future of the horseless carriage looks bright.  After all, in China, with one-fifth of the globe’s population, only one person in six million owns a car!

Below, The Premier Motor Corp. geared their ads in 1920 towards the woman.  To illustrate how simple it was to drive their autos. 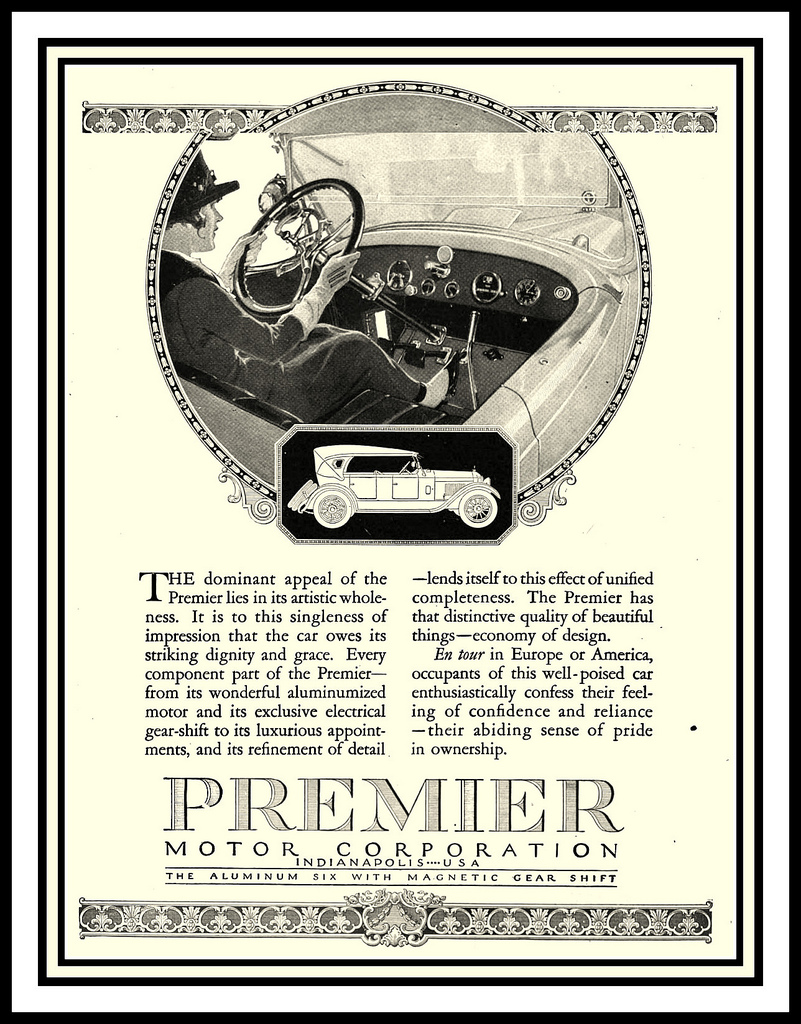